Call
Smart Home Security
Integration you can count on. 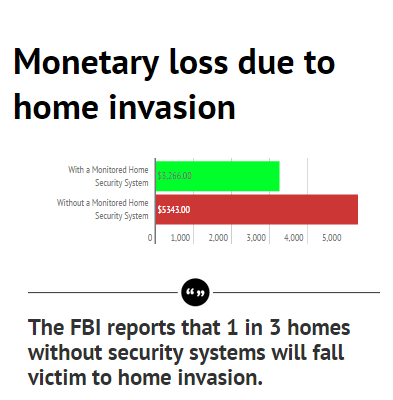 The answer is in the numbers. Statistics show how much a security system can impact in deterring crime in homes and entire neighborhoods. According to the Electric Security Association, the average loss of a home invasion is $5,343.00, but that average drops roughly 39% to $3,266.00 for homes that have a monitored security system.  The FBI reports that 1 in 3 homes without a security system will fall victim to a burglary as compared to 1 in 250 homes that do have a security system.

Additionally, a study was conducted by Cromwell-Olson-Avary that demonstrated that nearly all convicted burglars (90 %) admitted that they would avoid homes that are equipped with security systems as well as concluding that 75% would reconsider entering a home that had a yard sign or window decal.

The Alarm Industry Research and Educational Foundation (AIREF) conducted a study in 2013 that found that 60% of convicted burglars stated that they would avoid a target home if they were aware an alarm system was present. The Electric Security Association stated “even during impulsive, unplanned burglaries, more than 50% of the intruders said they would discontinue the burglary if they discovered an alarm. Another 31% said they would consider discontinuing the burglary.” The ESA estimates that 74% of uncompleted intrusions can be credited to an audible alarm. The likelihood of a home invasion to occur decreases by the number of monitored security systems in a neighborhood.

Protect Your Family
Get started & request your consultation today!
See What People Are Saying
Reviews From Real Customers in MD, VA & DC

“During our installation process, the technicians were knowledgeable and explained every step. The best part is the pricing for the quality of service. The value…”

“I would like to commend the Trinity reps for their outstanding customer service. In every interaction they demonstrated a keen knowledge and were able to…”

“Trinity is the very best out there. Anytime that I have a question, issue or concern, they jump right in and take care of it.…”

“Trinity Wiring and Security Solutions has given my family peace of mind. We always know that our house is secure and the system is easy…”

“Liam helped us from start to finish on our security system needs. He was knowledgeable, understanding and helpful throughout the process. He catered to our…”

“Trinity was also able to put a surround sound system in our family room. Thanks to Trinity, this room in our home is now better…”